This simple but delicious Polish Cucumber Salad combines fresh summer cucumbers with Eastern European flavors for a side dish your family is sure to love!

Blame it on my Slovak roots but I have been on an Eastern European kick for the past few weeks and this delicious Polish cucumber salad has quickly become one of my favorite summer side dishes.

Mizeria literally translates to "misery" in Polish. But this salad as anything but miserable! So why is it called that? Well that answer is actually up for debate.

Some claim that the origins of this salad are linked to Queen Bona Sforza who brought several kinds of vegetables with her from Italy to Poland. The myth is that she was miserable in missing foods from home and thus... mizeria.

Others however think this story is a complete load of garbage. That neither cucumbers nor mizeria had anything to do with Queen Bona proposing the more likely scenario that mizeria gets its name because it was primarily poor peasants who invented it.

But whatever its true origins, Mizeria is a delicious and beloved dish combining cucumbers, sour cream, vinegar and herbs. And I hope you love it as much as we do!

More salad recipes you will love.

There are many variations of this recipe so feel free to play around with it according to your personal taste. Such as switching vinegar for lemon juice, or adding chopped mint and parsley.

This Polish Cucumber Salad makes a great fresh side dish to any hearty meal. I especially love serving it with my Beef Paprikash or Mushroom Stroganoff recipes.

Made this Polish Cucumber Salad? Let me know what you think in the comments! 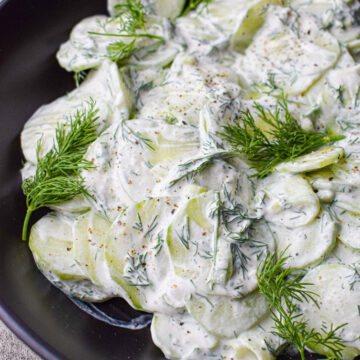 Keyword Cucumbers, Salad, Summer
Tried this recipe?Let us know how it was!

Hi, I'm Elizabeth! I love creating fresh, seasonal recipes for the whole family to enjoy! I live in Texas with my British born husband Tom and our two littles Arlo and Lila. When I'm not developing delicious recipes to share with you all I also run the non-profit Preserve International. Check out our website to learn more about our mission to fight hunger in east Africa through our innovative food post-harvest improvement programs!

A percentage of all proceeds made by The Jam Jar Kitchen blog are donated to Preserve International to fund empowerment programs for women small-scale farmers in northern Uganda. Join our mission to fight hunger and seasonal poverty through innovative post harvest and food preservation technology and training!

Sign up to The Jam Jar Kitchen Newsletter to receive new free recipes every month!